The Conference was so much more than we expected. In terms of the number of people who responded to our invitation ( we had 26 participants in Sanjoy’s workshop and 65 participants in the 2 day Conference), the enthusiastic participation in all the sessions, the smiles, the thoughtful questions, the many new friendships formed, the new conversations taking place, the emerging links between TO and other kinds of social justice work in India, and most of all, the number of young and not so young fresh TO converts!

The 26 participants in Sanjoy’s 3 day Forum Theatre workshop had an unforgettable experience. Not only did they get to experience first hand the power of 30 years of TO work , they got to work with Sima too! While Sanjoy’s skilful improvisations and transitions from game to image work to scenes offered great learning opportunities, his extended debriefs and the long discussions that interspersed all the activities emphasised the politics of this work, that is never to be neglected. Sima’s warmth, energy and prodigious talent as an actress infused great enthusiasm in the group. Together Sanjoy and Sima brought a wealth of learning and their generous sharing was a great contribution to the Conference. We were also fortunate to have Ralph Yarrow, an old friend of Jana Sanskriti, at the Conference.

22 Presenters, 65 participants, from across India

It was exciting beyond words to see TO bringing different worlds together. The programme was put together with a view to appealing to a mixed audience of TO practitioners and strangers to TO. We had also tried to balance theory and practice, experience and reflection, through a variety of sessions.

We opened with a drum circle, and had three panel presentations, three workshops and three games sessions over two days. TO practitioners from Bangalore, Mumbai, Ahmedabad and Delhi facilitated some classic, and popular TO games-  academics and activists, performers, playwrights, students, teachers, all played together.

Sanjoy Ganguly’s inaugural address was followed by a modified version of  a World Cafe session. Earnest and engaged group discussions took place at the following ‘stations’:   ” The ‘real’ India- rural or urban?” “Is TO Activism or Art?” “Do we always need The Big Picture?” and “India needs multilingual classrooms”. Our panel on women-  called “Rehearsal for Change- Women Enact Social Change”, had four remarkable women  presenters who held their audience spellbound with their narratives of struggle and success.   At the end of Day 1, one of these  presenters gave us an inspiring solo performance  about a pioneering woman educator from 19th century India.

Panels on Day 2 showed the wide spectrum of work being done in education, teacher training, with youth and children, and in mental health, and included one disturbing and thought-provoking presentation on state suppression of voices of dissent.  On the afternoon of Day 2, when everyone had had both a taste of TO and some exposure to the range of work being done around the country, we had a discussion on adaptations and modifications of TO. This session, titled  “Is there a ‘real’ TO?”, was chaired by Ralph Yarrow who provided a useful pocket description of TO for the many people in the conference who were new to TO.  Facilitators spoke about  combining TO with other pedagogies and shared their experiences, as well as some doubts and questions. There was a brief discussion, following my presentation in this session, about the difference in approach between TO and David Diamond’s Theatre for Living.

The last session on Day 2 was an innovative Image Theatre exercise. For newcomers to TO, this was an opportunity to  experience the magic of this versatile tool. The exercise invited people to imagine a TO community for India- and it was wonderful to see great idealism and a pragmatic understanding of the challenges of building such a community. The exercise left people thinking of possibilities, and in the last few minutes of this session, we invited everyone to identify three people in the room they would want to work with, stay in touch with, or visit etc.

During the closing ceremony, and in informal chats through the Conference, there was appreciation of the democratic space this conference created, the freedom for everyone to be themselves and express themselves freely. The written feedback also stressed this. I think this was the best appreciation for all of us who had worked to organise this conference. We conceived of it as a workshop more  than as a conference- trying to make sure everyone felt respected, had fun, and also found the sessions useful. Given that we had a really diverse group of 65 people, the Conference was actually an experiment in dialogue- the conference objective of opening up spaces for dialogue across our differences was something that we tried to incorporate in the way we conducted every session.

One important and integral part of this effort was the space we gave to other Indian languages. We encouraged people to use the language of their choice, and several presentations and the two evening performances happened in languages other than English. The impromptu singing in the breaks was always in regional Indian languages.  For discussions, we restricted ourselves to two languages, English and Hindi, in order to save time. Although people moved between English and Hindi fairly casually, and there was no serious discussion on this, I believe we achieved something significant with this policy decision on opening  the door to Indian languages other than English. At one level, we did not wish to impose English on our presenters and performers who worked in other languages. It also allowed all of us to be as we are outside the conference, in the real world, moving freely between languages. But at a much deeper level, it was an experiment in our ability to transcend the politics of language. We saw the definite possibility; we also saw areas for learning and improvement.

The parai performance on the evening of Day 2 was the perfect closing- a group of young men and women from a community that had seen oppression over centuries, sang and danced to the beat of the parai, drawing everyone in with their irresistible energy and joy. That night, everything seemed possible.

Here are the links to the photo albus of the conference

Diversity Dialogues– this is a link to select conference pictures.
DD in Portraits– this is a link to some really nice individual pictures, close ups , etc, that are not included in the general DD album. Some of us may find some of these worth keeping, or sharing.
Haan, main Savitribai Phule!– as the name says, these are pictures of Sushama Deshpande’s performance. Contains some absolute gems.

The Parai Makkal Mandaram from Kancheepuram rendered a befitting end to the 5 day theatre of the oppressed conference. Young men, women and children danced to the beat of the Parai,a traditional percussion instrument, used in village communities even to this day.

We began the conference with images and we also ended it with them – Images that depicted what the TO community in India means to them and its future. 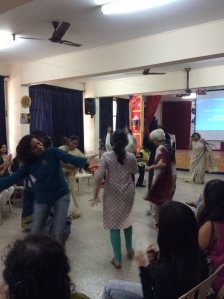 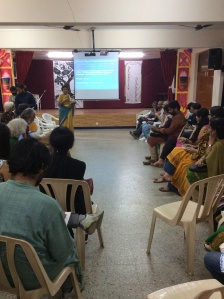 Panel II highlighting The Liberatory Pedagogies in the Indian Context 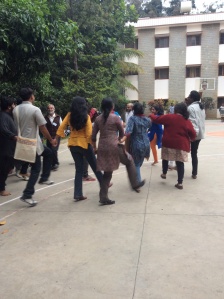 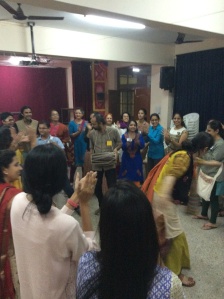 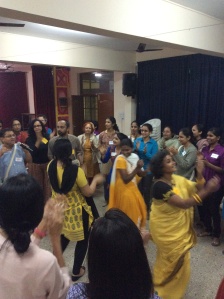 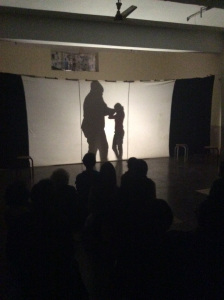 Shadow liberation, a creative project by the Srishti school of Art, Design and Technology brings shadow theatre based on the principles of Theatre of the Oppressed. The workshop was facilitated by Evan Hasting, the creative director of Shadow Liberation. The workshop brought to the forefront a painful story, crafted in a visually sensitive style. Speaking about childhood sexual abuse brings up strong emotions.

However, expressing this in the fluidity of light and the heaviness of shadows created a space that felt safe to express one’s own experiences.   Participants used the space to intervene by expressing anger, confusion, assertion and love.Fortunately, there was enough space for us to see the process behind the screen and create our own images to express different perspectives.

All the great men and all the great women have come together this afternoon to talk about how women have been rehearsing and creating dialogue for social change. CS Lakshmi, Sima Ganguly, Aditi Desai and Sushama Deshpande discuss their experiences with us.

The World cafe- TO style, brought all the participants together, expressing their diverse opinions. We wondered if art and activism can really be separated and if the urban is made up of the rural. Though, Radha played the somber time keeper, the conversations flowed, as did the connections.

Some of the comments-

‘Practising TO is activism. Integrating it is art’

‘When I look at cells through a large lens, everything looks like cancer. I need a microscope’

‘To change something big, we need to start from ourselves. From home.’

‘When we speak of the urban or rural, we are really speaking of multiple identities.’ 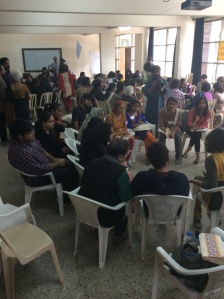 Radha opens the the conference with her inaugural address.

”We always wonder how to be with different people and this conference seeks to look at that  ” She explains this difference in the broad context of their work, ideologies, personal history etc all of which are addressed in Theatre of the Oppressed.

“We need to create spaces where dialogue is possible.”

“”People have been practicing TO and its variations across the country and this conference will bring all of them together.”

“CCDC will look at the potential of TO to create communities rather than divisions.”

I was addressing a conference in Vienna. One of the audience members asked “why so much fear in European circles towards theatre of the Oppressed”…In villages there is much less fear  they share their stories, connection exists …In Europe it is the individual…the market decides how you should think or be…we are confining ourselves in the prism of individualism…….Alienation is in our society we need to challenge…..One sadhu told one of my friends, ‘thoughts evolve when people mingle..we have to see Theatre of the Oppressed” in the light of this…we are not seeking solution…we are asking people to think…directly engaging and debating ..there is no point in having a dialogue only with the objective of making one’s point , that will just lead to multiple monologues. In theatre there is scope for dialogue, we create convergence by creating connection through theatre.

The underprivileged need theatrical means. It is up to us to transfer these theatrical means to them. Commercial or mainstream theatre is highly alienated. Everyone should have access to theatre which will create engagement which will develop critical thinking.

This critical thinking will question, challenge, complement and only that can help the polluted democracy we live within today. Concept of participation is narrow, whether it comes to making or implementing policies. Many NGOs also work in the same way though they claim to have strong ideas about democracy they too succumb to the same. Theatre is always seen as some kind of support  service we want people to see it as politics. And Theatre of the Oppressed is able to democratise politics democratise theatre.

When we need to collect ration cards we are interested in whether we get our ration cards and we don’t care if others don’t. This is collective self interest. Now we need to move from collective self interest to collectivism. Theatre will help us to do that. Theatre will generate political action.People will discover the genesis of a problem through theatre and this will help people to deal or face the problem and thus break the passivity…when we are intellectually evolving we cant be passive.

I am not an elitist when it comes to intellectualism. Everyone is an intellectual.They dont recognise the intellectual faculties in them. So perfection exits but does not manifest in actions.Theatre allows for introspection. One woman Mary cried after she performed on stage. Her friends asked her why she is crying and she said ‘I never knew I could do something like this’.